Animal of potency and power. 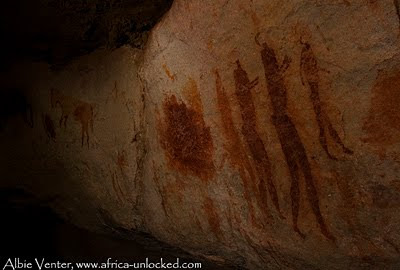 An obscure cave in the Cederberg. Note the “hooved” human figures and the horselike figure in the background, possibly a “rain animal”.

For a people who had to rely largely on veld food such as Geophytes (Bulbs, etc) meat was indeed a much sought after commodity. And these to a large extent were in the form of smaller mammals and birds such Korhaan (Bustards) which they ensnared. Thus one can imagine that a large animal such as Kudu, Hartebeest or Eland were indeed a rare treat. None more so that the majestic Eland, unusual in that its meat had an unusually large quantity of fat. But what is more interesting is that the Bushman not only regarded the Eland as a source of protein but also as the animal of potency and power. In regions rich in a wide variety of antelope it is obvious that the distinctive Eland shape dominates their art, often in association with dance scenes – another reason why the art should not be viewed as mere documentation of their life.
When entering the trance like state during the well documented rhythmic dance people are said to “become” an animal – often the Eland. Next time you view rock art notice how the human figures often have the heads and feet of animals (the Bushmand were not known to wear masks). In this trance they would perform rituals like blessing a hunt, cure the sick or bring rain. 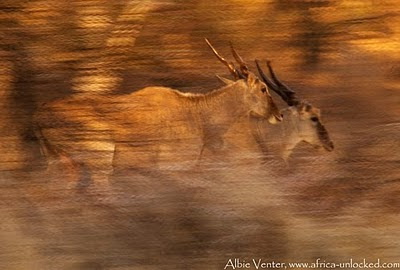 For years I tried to depict the enigmatic Eland from the mysterious point of view of the Bushman. Subconciously I had already given up when one afternoon I managed this shot. To me it seems like the pair of Eland are running off a stone age rock art site into reality.
Posted by Africa Unlocked at 9:46 PM No comments: