Greater Kruger at its best

The legendary Kruger National Park is undeniably one of Africa's greatest wildlife destinations. It really offers everything from some of the most informative and exciting wilderness trails to game lodge experiences without rival. Regardless of ones interests, it is sure to deliver. We have hosted a safari to some of the premium lodges in the area namely Londolozi and Singita Lebombo. Although within the same region these two properties are significantly different and offers some of the best wildlife out there. 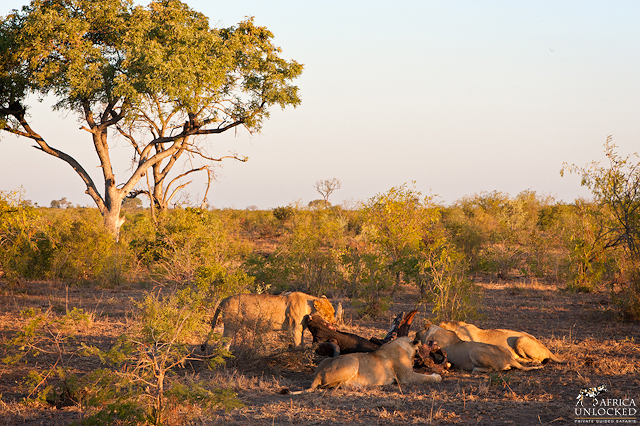 Our first stop was Londolozi and upon arrival, we basically encountered all of the big and charismatic animals, the highlight being a pride of seven lionesses feeding on a day old dead buffalo, a great  portent of what was to follow over the next few days. The total tally of lions alone was 44 animals while we encountered no less than 7 individual leopards.

Thanks to the very active and effective anti-poaching activities whithin the conservancies White Rhino populations are still stable and we were lucky to encounter a few of them.
Londolozi is known for its pioneering work on Leopard habituation and now offers a world class experience with the most elusive of the big cats. This female is reputedly related to the original mother leopard that was initially habituated to game viewing activities in the 70's.

Next stop was Singita Lebombo. This private concession on the very eastern corner of Kruger National Park and straddles the Lebombo mountain range on the border of Mozambique. What leds additional appeal is the meandering Nwanetsi river.  With current drought South Africa is really affecting wildlife and wildlife areas tremendously. Although disturbing to see, one still has to keep in mind that this is a natural process that also contributes to wildlife population control. Wildlife viewing can actually be very good during these dry conditions. Watercourses such as the scenic Nwanetsi river is an artery of life and attracts large numbers of grazers while predators follow shortly behind. The Lebombo concession is known for its large lion prides. The Shish pride, for instance split up into ten and 17 animals respectively with four large males ranging over both subgroups.


And within the Shish pride lurks one of the most enigmatic of African mammals currently to be seen on the continent. A white lion. As luchk would have it we didn't find this rare individual until our second last day. But what a great sighting we had once we located the pride. The arresting vision of a lions glare through unusual blue eyes is something to experience. Words fail hopelessly.


And finally, just to show that it doesn't have to be rough out there, here are some images of the exquisite Singita Lebombo Lodge.

If you would like to arrange your safari to any of these destinations please contact us here.

Posted by Africa Unlocked at 6:46 AM No comments: