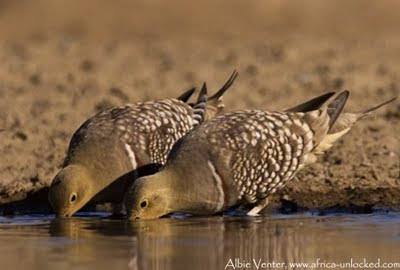 Still in the Kalahari, I thought to pay a bit of attention to the birds in particular. As a birding destination the Kalahari has few equals. Although a semi arid region (some even refer to it as a desert) a short time spent at a waterhole observing birds may indeed produce more numbers and species diversity than walking through a tropical forest for the same period of time. Although we were hosting a photographic trip for C4 images and Safari’s I couldn’t resist indulging my ornithological interest, albeit on a very casual pace. En route there we already ticked off Martial eagle, Lappet Faced and White-backed Vulture. In Twee Rivieren the regular Kalahari species showed themselves. Chestnut-vented titbabbler, Dusky Sunbird, Scaly Feathered Finch and Black Cheeked Waxbill to mention but a few.

In terms of raptors the Kalahari probably has no equal and regular sightings of Lanner falcon, African Pigmy Falcon and Greater Kestrel were all on the menu, as well as the localised and sought after Red Necked Falcon. In camp were both Verraux’s Eagle owl and Pearl Spotted Owlet, the former putting on a great display with its recently caught prey in the dead tree right in front of our chalet. Except for the charismatic Kalahari beauties such as Swallow tailed bee eater, Crimson Breasted Shrike, and Marico Flycatcher, Kori Bustard and Secretary Bird numerous others made the trip more than worth while.

Kalahari Specials: An enornous Verraux's Eagle Owl and Dusky Sunbird
The highlight of the trip though was a pair of breeding African Pigmy Falcons but for more information on them I can only say “Watch this Space”. 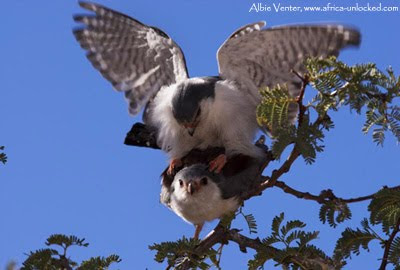 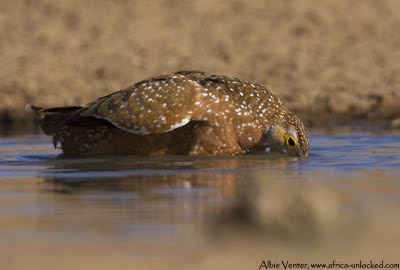 Male Sandgrouse such as the Burchell's Sandgrouse were all "belly wetting" in order to provide their chicks at the nest with much needed moisture far out in the desert.

Posted by Africa Unlocked at 11:06 PM

Sandgrouse are one of my favorite birds. nice belly wetting images

You got some images of great birds there...