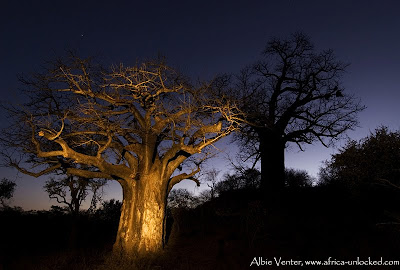 Iconic Boababs Tower over the Landscape
I have just returned from co instructing an Ecoquest Course. Eco Training, the leader in field guide training in South Africa has designed this course based on the FGASA level 1 syllabus for anyone interested in gaining deeper insights into the functioning of ecosystems without having the stress of formal exams. The first part of the course was held at the Pafuri region in the far northern wilderness of Kruger on the banks of the Limpopo. What a place! Ancient Baobab’s tower over the tropical landscape where hunters, traders, poachers and other eccentrics (including the infamous Bvekenya Barnard) followed the Ivory Trail from their headquarters at Crook’s Corner where Zimbabwe, Mozambique and South Africa meet. 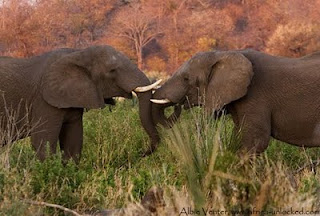 Elephant Cows Sparring on the Limpopo Floodplain.
This time of the year Kipling’s immortal Great Grey- green Greasy Limpopo has been transformed into a sandy stretch of almost a kilometre in width at certain places and the once mighty current now reduced to a trickle. Even though September is a dry month, it still remains a spectacular area and wildlife and birdlife are abundant. Amongst the wide variety of antelope, large herds of Buffalo and Elephant are around. Even though the migrants have not arrived back from the wintering grounds, birds were equally spectacular. Specials includes Meves’s Starling, African Yellow White Eye, Black Throated Wattle Eye and Bohms Spinetail. During the next few days I will add more snippets about our time there. 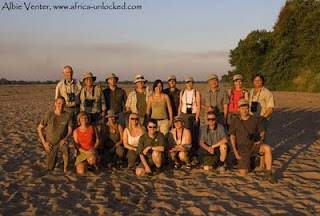 A wonderful group of enthusiastic guests made the course so much fun.

Posted by Africa Unlocked at 7:24 AM