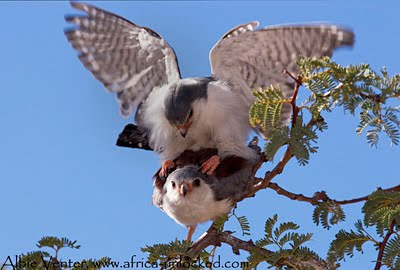 A sight as distinct to the Kalahari as the enormous Sociable Weaver nests they commandeer as nesting sites is the diminutive Pygmy Falcon. The tender colloquial name of Sneeuvalkie (Snow Falcon) given by the locals to this, the smallest African Falcon is harshly juxtaposed against the realities of the thirst-land wilderness it calls home.

Whilst leading a photographic safari for C4 images and Safaris we were very fortunate to observe a pair of Pygmy Falcons in the vicinity of a large Sociable Weaver nest in the Rooiputs campsite on the Botswana side of the park.

As it was approaching the breeding season these birds were very active around the Sociable Weaver colony in anticipation of spring. Both birds would arrive at the weaver colony and sit in close proximity to the nest chamber. The female, easily distinguished by her chestnut back would then enter one of the chambers from where she would give regular, albeit feint calls. A few minutes later she would exit the chamber and return to the awaiting male perched outside. At this stage he would mount her and proceed to mate with her, a sequence of events that they repeated regularly throughout the day. During one of their escapades a second male suddenly arrived on the scene. The attending male immediately acted aggressively towards him and at one stage they nearly tumbled to the ground, all of which was in line with my existing knowledge of an intruding male. 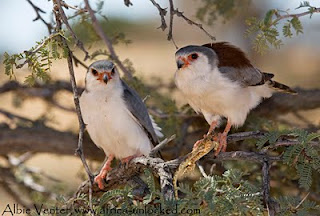 "A" male presented the female with an agameaas a nuptual gift...

At a later stage one of the males presented an agama to the female, a nuptial gift she happily accepted. After feeding on the reptile for quite some time with the male close at hand the second male arrived on the scene. The female immediately took off with the two males in hot pursuit. All of this still behaviour that can be expected in a situation where an immigrant male is trying to usurp breeding rights but not tolerated by the resident birds. 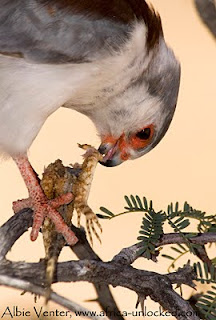 ...which she readily accepted.

During one of the mating rendezvous described above the second male arrived on the scene and perched very close to the mating pair. Much to my surprise the impostor was tolerated by the resident male, even as the resident proceeded to mount the female. Imagine my surprise when shortly after the male dismounted, the “impostor” casually mounted the female and proceeded to copulate with her as well! 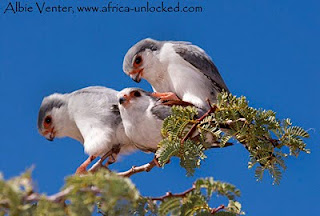 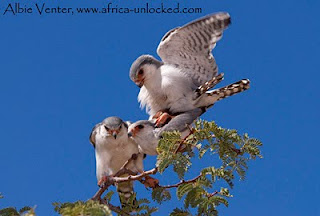 The female Falcon allowed both males to mount her.
The reversed sexual dimorphism, the fact that the female is more brightly coloured than the male is in line with Polyandrous birds such Painted snipes and my guess would be that this is in fact what is happening with Pygmy Falcons. However only detailed studies and genetic analysis would reveal any shared paternity. 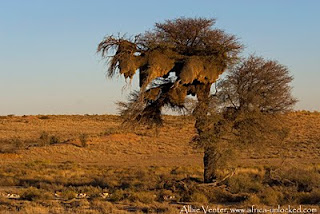 The Kalahari Landscape
Posted by Africa Unlocked at 1:42 AM