Day 1
Today, 13 years since our first visit to the Maasai Mara, the area still holds the same promise of wildlife action and excitement as our very first visit more than a decade ago.

Although we all met at OR Tambo International airport in Johannesburg the safari “officially” only started only once we touched down on Kenyan soil. After quick airport procedures we met our transfer at the gate and proceeded to the Fairview hotel in Nairobi. Except for the normal congested Nairobi traffic we reached the Fairview less than an hour after departing the airport. Here in verdant gardens this well kept sandstone hotel provided much appreciated rest after the long traveling day.  Our first safari day came to an end with a round of tusker beer and dinner.

Day 2
Breakfast the next morning and off to Wilson airport to our flight to the much anticipated Mara where we will hopefully catch up with the migration. Seamless logistical support from the minute we arrived made traveling effortless and within no time we were sitting high above the clouds over the Great Rift Valley en-route to the Mara.

After our Air Kenya plane touched down Geoffrey who was going to be our tracker for the next few days met us. At the airstrip herds of Giraffe. Topi and Warthog greeted us while a lone Hippo and a single lioness about 500 meters from camp made for an exciting welcoming committee.

After check in and a light lunch it was time for our much anticipated first game drive. I normally use the first couple of drives to familiarize myself with the area and get an idea of what animals are around. The first drive produced three individual solitary lions, Giraffe and Elephant on the plains as well as host of herbivores, most of which proving new to Southern African travellers.  We also encountered a small herd of wildebeest congregating along the Mere river bank. Although it proved promising, they didn’t cross the river. Back at camp we enjoyed drinks at the fire while everything from fruit bats and hippo’s to Hyenas and Lions serenaded us into dinner and then bed.


Day 3
Our morning started as expected very early with a wake up call and freshly brewed Kenyan coffee at 05:00 am. Lions were heard throughout the night around camp and the obvious decision was made to try and locate them.  Barely five minutes out of camp we came upon a trio of two males and a female.  This proved to be the photoshoot of the morning and what more can one ask for than apex predators in great light. Shortly afterwards we located a Black-backed Jackal den with small pups. Although we got some images we agreed that this deserves more time over the next few days. Later on we finally caught up with the wildebeest herds scattered over hundreds of hectares throughout golf course green fields. Breakfast served under a quintessential solitary tree allowed more time to absorb this spectacle of wildlife after which we made our way back home.

In the afternoon we aimed to get a glimpse of a leopard with two cubs but these proved too elusive.  Amidst thousands of heads of herbivores such as buffalo, topi, eland, impala and a single hippo feeding out of water a juvenile Bateleur provided great photo opportunities. We ended our day on the plains with the same three lions we found at daybreak. 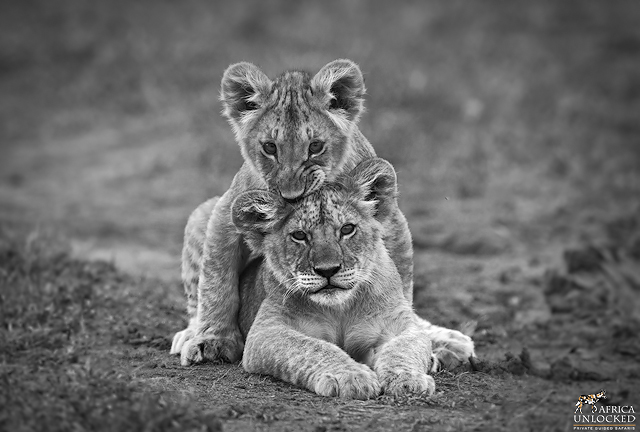 Today was one of those crazy Mara days where the action just never seemed to stop. After a first and unsuccessful search for a leopard along the Talek river our luck turned for the good when we found a pride of lions with several cubs in tow. Shortly after that we swung past the Jackal den where we photographed the pups playing and feeding as dad brought back some unidentifiable food for the pups. A nearby hyena den provided great interactions after which we decided to head back from brunch at camp. This was not to be as shortly afterward we located a very obliging Tawny eagle n the process of finishing off a stillborn Thompson’s Gazelle fawn.

In the afternoon we headed away from the river and the crowds in order to search for our own wildlife. The plan worked beautifully as we saw our first albeit very brief crossing of wildebeest over the Talek river. Shortly after that a nearby due of two lionesses with five playful cubs provided action for the rest of the afternoon. Thinking we would head back to camp a herd of giraffe in the sunset held us captive for the remainder of the afternoon repeatedly passing the best spot for photos. An appropriate way to end a perfect day.

As always fireside drinks with nearby hippos grunting and dinner finished of the day as we retired for bed.


Day 5
Cheetah were in our sights today. As is normal with Maasai Mara game drives much gets in the way of ones ideas and our Cheetah quest were interrupted hy a hunting clan of Spotted Hyenas shortly after a most perfect sunrise. With tails curled up in agitated excitement the clan ran beside our vehicle for a while in pursuit of some still unseen quarry. Something was about to happen. Upon closer inspection it looked like they were seeing off a lone trespassing Hyena. These highly territorial animals, although very social, won’t tolerate intruders.  We located the cheetah later in the morning already at rest and well fed and decided on a follow up visit. After our compulsory coffee stop we took a leisurely drive back to camp though vast herds of zebra, Wildebeest and Topi interspersed with the occasional Cape Buffalo.

In the afternoon we picked up the herds again and spent a most fruitful afternoon photographing them backlit.


Good Cheetah photo opportunities still eluded us. Although we had seen them before we didn’t stay long as the throng of other cars crowding the sighting distracted from the quality we strive to maintain. Thus today our aim was set at finding a mother and two almost independent cubs. The days started out with a pride of 15 lions, three females with 12 cubs walking through the yellow Mara grassland. Having had such great lion sightings earlier in the safari we passed up the opportunity to photograph this remarkable sighting.  And the gamble paid off. We finally caught up with the mother Cheetah who obligingly laid down with her two cubs in glorious light atop a termite mound. Two other vehicles were present at the sighting initially but before long they also left the scene leaving us alone with the elegant cats.

The afternoon drive delivered three individual sightings of lions, all of which were fast asleep! Contrary to the morning’s success the big cats didn’t do much and we had to return to camp empty handed. However the experience didn’t end there as three large males close to camp became vocal after dark providing a dramatic serenade while we were having drinks at the fire.

Everyone visiting the Maasai Mara is hoping to meet up with a herd of Wildebeest herd crossing one of the rivers. Although this can never be guaranteed it is certainly one of nature’s apex experiences. And today was about to be our lucky day. After yet another action packed morning spent with a pride of lions and two female cheetah our afternoon tea on the mess veranda was interrupted by Wildebeest snorts upstream of the Talek river. Dashing for our cameras and speeding out of camp we met up with the herd no less than 500 meters from camp! Once there we got ready for a long wait - these animals can take hours to make up their mind. Again this was not to be as within minutes of our arrival the first brave Wildebeest crossed the Talek river. Soon the entire herd, joined by scattered zebra tumbled down the bank leaving clouds of dust in their wake.

And so came the end of our safari. In order to allow for a graceful departure we do a shortened game dirve in the morning to allow sufficient time for a leisurely breakfast and check out. Yet even this shortened drive produced a spectacle. The Wildebeest herds which for the most part were scattered in vast feeding groups aling the plains had come together in tightly clumped herds along the Ol Kedyu Rongai spring and crossed this watercourse in battalions of dozens of animals wide. A most fitting goodbye from the Mara, or so we thought. After breakfast and check out  it was the last drive back to the airstrip but not before we was another three lionesses perched on a termite mound as well as a clan of 20 Spotted Hyenas finishing off the last bits of their kill. And so came the end of our safari as we gazed down on the vast green savannahs below. Until next time.

Posted by Africa Unlocked at 9:57 AM