Overnight flight from Heathrow to Jo’burg was smooth as before on a packed A380.  Within an hour of arriving we were on a Charter to Mashatu having been met and conducted extremely efficiently through Jo’burg airport.   After an 1 ½ hour flight we were met by Albie and Spike to be taken to the lodge, 40 minutes away.   3.30 tea, off at 4.00 for the first game/bird drive.  Started to become used to the white-browed Sparrow Weaver, followed hotly by the “first first”, the Sabota Lark – not seen before by me.  Albie’s target was 20 UDB firsts – very ambitious, with only 5 at the end of the evening!  2 were beautiful Coursers, the Temminck’s and the Bronzewinged, plus the Scalyfeathered Finch and the Namaqua Sandgrouse, pretty in flight and on the ground in a covey of 11.  This was out of a total of 35, many of which I had only seen once or twice before like the Groundscraper Thrush, Black-backed Puffback and Jacobin Cuckoo, plenty of lovely Bee-eaters and a stunning and obliging Martial Eagle.  A very promising first session for the birds!


All was overshadowed by finding a most peaceful Lioness lying by the river bank while her three 3-month old cubs came and played by the water, enchanting and very spoiling with nobody else around.  After quite a while, we moved on to find the Father Lion asleep by the track, taking no notice of us within feet of him!  A gorgeous sunset to match what we had seen.

AM 31st January.   5.30 breakfast for a 6.00 start to Brexit day!  Not long before we saw another Martial Eagle with its distinctive crest with one leg tucked up to make it look as if it had a stomach pouch.  This was followed by a pair of fine African Hawk Eagles, one with a hare it had killed, unusual because feathered prey are preferred.  Wahlberg’s Eagle, Crimson-breasted Shrike, Blackheaded Oriole, Diederik Cuckoo plus the new Meyer’s Parrot were the Bird features.  Next we were treated to a female, pregnant Leopard high up and partially hidden in a huge, very old Mashatu tree, one leg dangling down, looked at us but did not move position.  We then found a lovely herd of elephants with calves, some tiny, on their way to the river for drinking and having mud baths.  Again, it was a huge privilege to watch these wonderful totally wild animals, without anyone else anywhere near us.

PM 31st January.  A little more bird activity on one of the rivers, including a Wood Sandpiper, little groups of Three-banded Plovers, Egyptian Geese, one Grey Heron, being obscured by a nearly-submerged Crocodile.  The open attractive habitat consisted of Mopane bushes and trees, areas of flattened ground covered with large stones and areas of wild Sage Bushes where we saw the elephants in the morning, plus beautiful wooded banks to the rivers containing the magnificent Mashatu trees, possibly 2000+ years old.  A Kalahari Scrub-Robin was an exciting “new” find, which Albie had not seen for many years, along with Green Wood-hoopoes and a Scimitarbill, unusual but I had seen before.  We set out finding the Leopard we had seen in the morning, and an initial disappointment that she was no longer in the same tree gave way to the joy of seeing her in the cool shade below the opposite river-bank.  An utterly brilliant hour was spent watching her first lying and stretching a few feet away, seeing her walk round the vehicle before walking to the water to have lengthy drinks.  Gorgeous features and pregnant, so calm  - one other landrover with a filming camera near, otherwise again we were alone.  To cap it all, we had our sundowners under the most spectacular sunset. 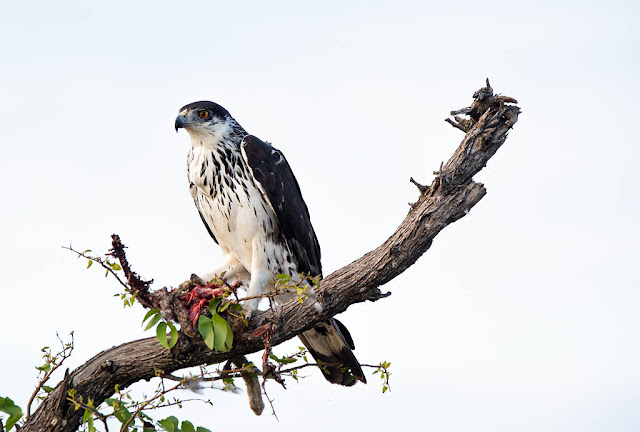 AM 1st February.  I hadn’t mentioned a juvenile little Sparrowhawk which perched on a branch just outside our room.  During dinner, we had also seen Fierynecked Nightjars cavorting over the pool in front of the lodge.  The new day was cooler but clearer with no cloud and no wind.  Our first score was an unusual sight of 30 Greater Flamingos flying in geese-like formation.  No Eagles until a brief look at an African Hawk Eagle and a Verreaux’s Eagle Owl, also only briefly seen.  A Capped Wheatear after a Great Sparrow and Marico Flycatcher perked Albie up to make the tenth “new”.    Half way there !!  As it became hotter, we found another Leopard, the adult cub of the one we had seen the previous evening.  He had just made a kill of a Wildebeest calf which he part buried and then moved away to find shade and rest.  We spent another long time just watching him.  We were alone and he was alone, completely untroubled.  How lucky we have been to be able to see and compare two beautiful Leopards, one male and the other female.  The other side of the harshness of the natural world was to witness the forlorn call of the newly bereft wildebeest mother, standing alone looking towards the Leopard’s “larder”. 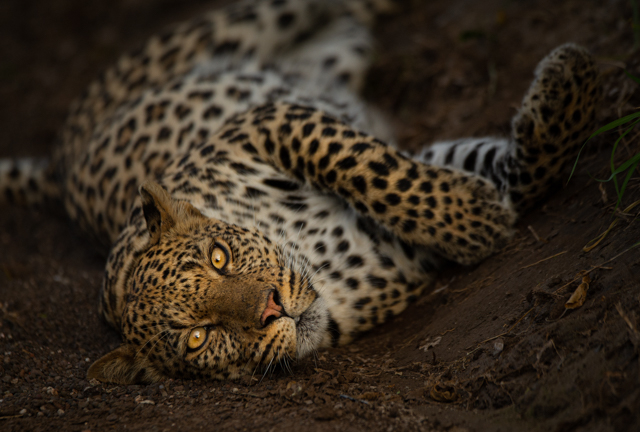 PM 1st February.  A quietish evening on the bird front trying to bring our total from the 80s to 3 figures.  A black Stork was another “new” and others not seen this trip included a Verreaux’s Eagle Owl and a Saddlebilled Stork (am possibly)!  We did find a solitary Kori Bustard walking quietly along, leaving us wondering whether it was a bigger bird than the Great Bustard!  All was totally eclipsed by seeing another Leopard, the third different one in 3 successive sessions.  This was a female just lying under the river bank in the cool in a similar way to the one the previous evening.  Again it did not mind us at all, sometimes sitting up to view a Kudu miles away on the dry river bed. At one point she walked away which gave Albie the chance to place a camera on the sand, and she duly obliged by walking up to it, nudging it and then walking on to lie down again.  She took our breath away, coming ridiculously close to the vehicle, just being so at ease with us.


2nd February.  A short morning drive featured a small herd of female elephants with young sliding down a steep river bank to the water.  We watched them drinking, the youngest unable to do so like the others with his trunk being too small!  So he improvised by sitting in the water, taking it directly into his mouth! 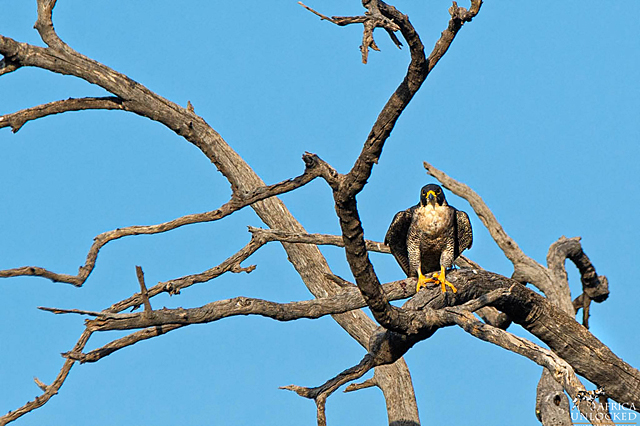 Time to move on and undertake a 5 hour car journey, which was lengthened by 2 hours, a detour necessitated by a flooded crossing!  Even at the crossing we took, Albie had to resort to the safety of being towed by the 4 x 4.  We saw a few species in the lush area just away from the airstrip – Pintailed Whydah, White-winged Widowbird, Abdim’s Storks, a Brown Snake Eagle and a Lanner Falcon at the crossing while Spike was towing Albie.

Spike was delightful, knowledgeable and with a real twinkle.  Also interested in wider issues, like Brexit.  He was a good driver and made a very good team with his spotter, KB and of course Albie!  So we said good-bye to a very good, comfortable set up at Mashatu, where we were the sole guests, the incredible Mashatu trees in an otherwise fairly flat, some scrubby Mopane and other vegetation, bereft of rain for some while, which we were told would produce a carpet of grass and wild flowers immediately the rain did appear.

A day in the car, initially on rough corrugated tracks, followed by straight mostly good tarmac roads with few cars and only occasional but huge lorries.  Both Pale and Dark Chanting Goshawks, Steppe Buzzards, smallish groups of Redbilled Quelea, Brown Snake Eagle and Cattle Egrets brought our “Mashatu” total to 102 with 10 totally new to me.  Now to try and beat it!

David Barnett
Posted by Africa Unlocked at 1:03 AM