I just returned from a photoshoot in the Waterberg, an area rich in history both recent and, well … not so recent. In fact several thousand years ago the first inhabitants of Africa walked these hills. The legendary Bushman or San. Except for the Egyptians, these eloquent people are one of the few African tribes who left a rich legacy of their spiritual lifestyle on the rocks of predominantly southern Africa. 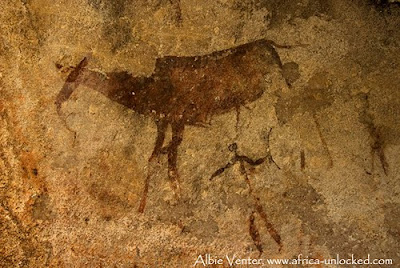 One can be forgiven for viewing these as merely decorative. Indeed these beautiful paintings do add a certain flair to the harsh rock faces but that’s not where it ends. More commonly, many just assume that these paintings are a documentation of animals and events that occurred during their day to day life. To a certain degree both ways of looking at the paintings are not wrong. Aesthetically they are beautiful and often one can discern animals such as Eland, Giraffe and the like which the bushman may have encountered and or hunted. It is when one views the fascinating array of dots, lines, circles and weird unidentifiable animals adjacent to the more easily recognized drawings that things start fitting more difficultly into our western mould. 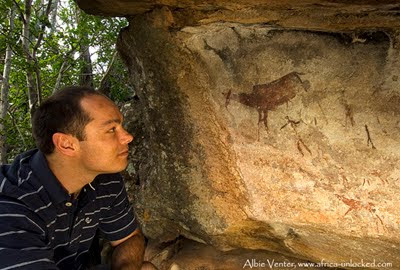 Also many, if not most painting are in areas not suited for habitation such as a small inaccessible ledge.
Enter the spiritual realm of the bushman. The well known rhythmic dancing induces a trans-like state of consciousness and it is when certain members (i.e. the shaman) enter this realm that rites are performed. Rain making, blessing a hunt or curing the ill occurs during this state. Important also to note is that no paintings were ever done during this state but rather afterwards when the mind clears again. Space just doesn’t allow a more in depth discussion but for those interested David Lewis Williams’s Images of Power is sure to fascinate.
Posted by Africa Unlocked at 6:50 AM No comments: