Behind the shot - Cheetah and Cubs

I was asked by Gerry and the guys from Wild Eye to share some thoughts behind the Cheetah image that won the February 2012 Photographic competition and decided to add it here as well.

﻿ ﻿  I was leading a photographic safari for C4 images and Safaris in the Maasai Mara and we were following this female cheetah and her six, six week old cubs for an entire week. During this time we were privileged to witness their antics and adventures as they faced up to the many challenges of life in the Maasai Mara. The cubs playing on a very photogenic termite mound, mom trying to hunt and even crossing a river were all some of the remarkable sighting this family gave us. We even got the very typical scene of them on a termite mound. Yet although we managed to get images of all 6 cubs together they were very often obscured by grass, not all cubs were very visible or, as Murphy would have it, taken in very flat light. Ever optimistic we went to say goodbye to the family on our very last morning.

﻿ ﻿
﻿It is quite easy to get Cheetah images on top of termite mounds in the Maasai Mara. As the animals walk through the flat terrain they seek out anything which gives them some vantage points and a quick scan often reveals the right perch. So on the very last morning we found them walking through the grass and headed straight for a termite mound. I prefer moody backlit images as it lends fantastic atmosphere to photographs and with this in mind gambled for the money shot and positioned our vehicle away from the others who went for the classic front lit images. The rapidly rising equatorial sun was also not in our favour and realistically we only had a few minutes before the sky would be a completely washed out white. At this stage we were only hoping and praying that mom would oblige and go for “our” termite mound. And as it (very rarely) happens in nature all came together for a few brief moments. With the vehicle in a good position mom made her way onto the termite mound, then one by one each boisterous cub joined one another next to mom. I only got two shots of this scene before the light changed and the cubs started playing in the grass.

Posted by Africa Unlocked at 11:50 PM No comments:

﻿﻿﻿﻿﻿﻿﻿﻿﻿﻿I never leave home without a macro lens. There always seems something to photograph, even when back at camp after game drives or during rainy weather when most photographers pack away their gear. One’s back garden always seems to provide some incredible sightings and in fact some of my favourite images have been taken right in my back yard.﻿﻿
﻿﻿ 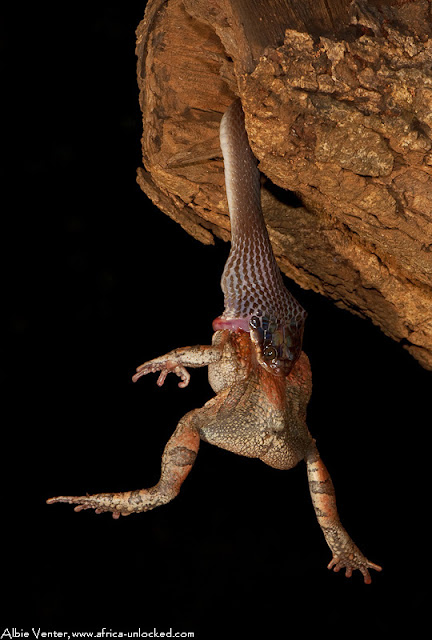 I recently stumbled upon this fantastic scene at home. A fairly large Herald snake had gotten hold of a large Red Toad, probably hunting it from within the hollow log pictures above. Once immobilized the snake could not get the toad back into the tree hole and was left to consume it from a somewhat precarious (to say the least!) position.
﻿﻿﻿
﻿

Whether the snake would eventually make a meal of its quarry was anyone's guess which meant that I had to stay with the snake quite a while to determine and photograph the unfolding events. These things take a while though and I was very fortunate that I had time on my hands that day. Scenes like this certainly do not come around too often and it was indeed a pleasure to witness such drama unfold almost from start to end.
Posted by Africa Unlocked at 11:28 PM 2 comments: