Still following the packs of Laikipia.

Dedicated Photographic trips are escalating and what’s really amazing is the amount of photographers who are almost immediately enquiring and even booking their next trip to the area after spending time with Wilddogs. During  October the dogs denned in an area which, although inaccessible to see offered great photographic opportunities as the adults left the den.


Thus most days during our safaris we were able to follow the pack on early morning and late afternoon hunts. Keeping up with them however proved a much more difficult task as the frenzied pack needed to hunt way more than their normal requirements. The reason of course, the growing puppies back at the den.  Over the next few month on subsequent trips we eventually picked up the pups, and the action erupted in all earnest. Although the pups joined the adults almost everywhere, they were still incapable of hunting for themselves, thus the action was all over the place.


The dense bush of Laikipia often obscured the action but inevitably at some stages we manage to catch up with them in the midst of it all. Ever dynamic nature, the dogs, due to their increased food demands, started incorporating more Impalas in their hunts. This in turn had the effect that the prey remains lasted longer than the little Did dik which formed a large percentage of their kills and attracted more Spotted Hyenas than before. This in turn increased interactions between the species and yes you guessed it. Fantastic action photography.


Although we concentrate heavily on the Wilddogs of the area and as a result often miss out on the other predators, the beauty of the area force one to pause and take it all in.

Not only by day but also at night!

And as always I try to introduce people to the unique birds and other creatures of an area. And with many of the northern species reaching their southern most distribution limit, its a treat to find and photograph them knowing that it will be difficult to locate them elsewhere in East or Southern Africa


Now at six months old the puppies have pretty much lost their youthful look and except for the slight size difference there is very little that sets them apart from the adults. Of the 12 puppies, ?? survived. Its one of natures ironies that such a successful carnivore face such a big dilemma as when they are ready to disperse much of the wilderness that supports their species are disappearing. Once the area is saturated with dogs they are forced to disperse into areas where conflict with people become more likely. It is however very comforting to know that they occur is such unspoilt wildernesses such as Laikipia.


Contact me here if you would like to join any scheduled trips  or have your own private photographic safari arranged. 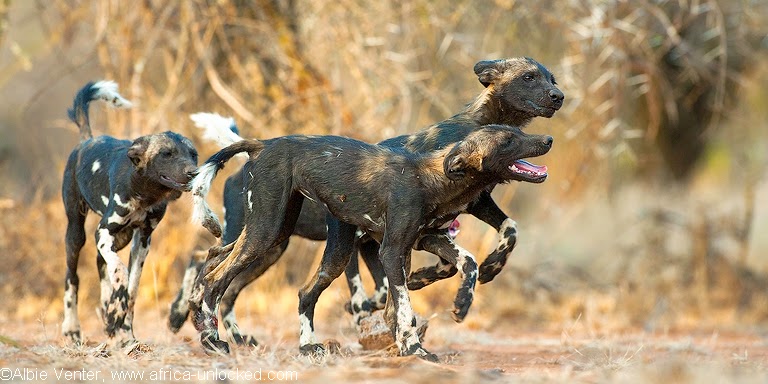 And here are some extracts of what the guests had to say.

Thanks you for the trip. It was fantastic to do this with you as guide. I am looking since a few years for Wilddogs now I got it. It was really great to see and watch them, these really wild and rare animals and at last I got some of those pictures I want - Great! I really enjoyed this trip with you and am glad I have met you and having you as guide. Each time we found the dogs you put the car in the right position. We also had fun on the trip. I hope to see you soon again, at least Sept/October this year. MK - Germany

Loved the wilddog safari. Much enhanced by your enthusiasm and knowledge. Would love to return for the puppies outing. Hope to do another safari with you sometime. PS: Extra thanks for allowing me to photograph the Vulturine Guineefowl :) P - United Kingdom

After a 15 year wait to see wilddogs this week has surpassed all expectations and any wild dreams I had before I came. As a complete camera nut, your patience and advice has been really appreceated.  But most of all a heartfelt thanks for a wonderfully guided trip. Your ability to to put us in ecactly the right place and your knowledge of these wonderful animals has made this a complete joyfull trip and one that sits firmly in my top 3. I really hope that in the future there will be another "Albie" trip to come. SL - United Kingdom

What can we say? Wilddog safari - we certainly had that - it was amazing much more than we could ever have hoped for. Your enthusiasm for these wonderful animals certainly came through. And together with your sense of humour, your warmth in making us feel so welcome - very much appreceated. We would cartainly hope to see you again, whether that be in Laikipia or elsewhere, we do hope so. K&D A - United Kingdom

Thanks Albie. Brilliant Dogs, Jokes no better. Until next year. JM - Scotland
Posted by Africa Unlocked at 7:10 AM No comments:

Contrary to what many believe, the great migration never really starts nor stops ever. It is a perpetual movement of the mega herd of herbivores comprising wildebeest, zebra, and some species of gazelle. One of the main events on our safari schedule is the annual calving season during the months of February and March in the southern Serengeti. Here we caught up with the herd in a beautiful location in the southern woodland.  Africa’s quintessential plains meet with the woodland and create a feature-full landscape of flat topped Acacia woodland interspersed with scenic Granite outcrops. These Granite kopje’s adds additional flavor and on them we often encountered prides of Lions, scenes reminiscent of Disney’s the Lion King.

A chorus of Cape Turtle dove calls welcomed the day each morning as we travelled through the woodlands and we were treated to some of Africas most quintessential sunsets.

All the large predators were present in numbers and we even witnessed a pair of newly independent Cheetah siblings taking down a wildebeest calf. Lions with cubs playing in golden light, a large male leopard and animals beyond count all contributed to a very memorable trip.


A big highlight was upon our return to camp one evening our chats were interrupted by a lioness walking nonchalantly through camp. And being a group of photographer one would imagine at least one good image between the lot of us. But alas...nothing to prove the sighting.


Something I personally take real pleasure from is the fact that birds of prey were present in both species diversity as well as numbers. And although it is difficult to do proper birding during a safari in one of the worlds predator hotspots I did manage to tick off more than 120 species.

Posted by Africa Unlocked at 2:06 AM No comments:

This small little park on the outskirts of Nakuru town in Kenya’s rift valley never fails to surprise me. Probably not the wildest place in the world as one can see the outlying developed areas from most places in the park it certainly punches way above its weight in terms of photographic opportunities. One of the most remarkable phenomena is the incredible rise of the water levels. There are a few explanations for it but it is possibly resulting from increased freshwater inflow into the lake due to high rainfall. This results in lowering the salinity of the water, which in turn reduces the “salt flats” which then degrades the area as a feeding spot for the myriad flamingoes and other waders. Currently the lake shore has reached the entrance gate, submerging all the original offices and the rising water levels have drowned hundreds (thousands?) of mature Fever Trees along the lake edge.  The lack of numbers of waders notwithstanding, this easily accessible park still features highly on photographers hit list.


However to see the big cats within such close proximity to built up areas is truly a testimony to the conservation success and tolerance of neighboring communities. During our recent travels we saw several lion prides, Leopard, the most memorable of which was perched regally in a golden Fever Tree Forest as well as a remarkable sighting of a Striped Hyena.

Birds never disappoint and in addition to a new lifer for me in the form of European Shoveller, I also saw a spectacular and always special Narina Trogon.