Coypu. An alien in East Africa 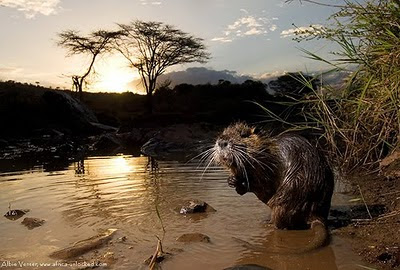 Who has ever heard of a Coypu? I certainly haven’t. This water dwelling rodent originates from South America. It was introduced to Kenya for the fur trade in the 1050’s and, guess what, they escaped. Now they are digging up river bank and dams and eating away reedbeds and other aquatic vegetation. It is also thought that they may have been responsible for the periodic collapse of Lake Naivasha’s waterplants. It’s not only in Africa where feral populations exist but also in many other parts of the world. This is a habituated animal which I was able to get close enough to photograph with a wide angle. I wanted to capture, without sounding overly emotional or anthropomorphic, the essence of what so often happens. An almost sad looking creature just doing what it’s intended to do, yet with man’s influence it became unwanted in a foreign country far from its native home.
Posted by Africa Unlocked at 12:11 AM