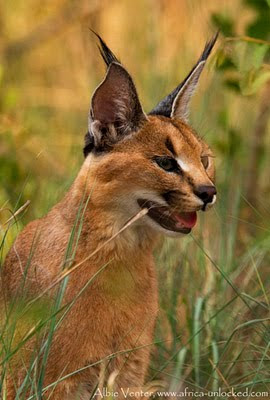 Pro photographer Shem Compion posted something on Photographic ethics a while ago. Have a look at it here. Ethics are something I feel strongly about and although time limits an in-depth discussion here I would like to share a though or two. There are many angles attached to ethics from Photoshop techniques such as cloning which alters the actual image as it happened in nature to the unethical handling of animals. Then there are grey areas such as baiting animals (ever photographed birds around a feeder?) or the sticky issue of photographing captive animals. Personally I have no problem with some of these such as baiting or even photographing captive animals but when such techniques are employed I feel it must be disclosed by the photographer. 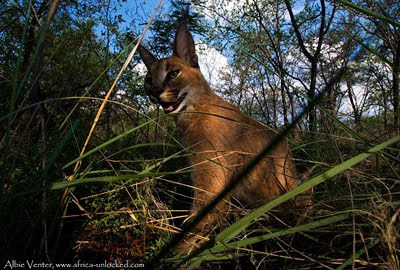 Just before heading to the bush these past two weeks I had the opportunity to photograph this Caracal in the process of being rehabilitated to be released back into the wild. I could have declined to chance to photograph this confiding cat or used the opportunity to get close this beautiful animal. These pics may also come in handy when having to illustrate a conservation talk at some stage in future especially as these animals are facing dire persecution in large parts of Southern Africa’s farming community. Maybe images like these will ensure this species remain in the wild longer, enhancing our chances to get better images of wild ones.
Posted by Africa Unlocked at 9:12 PM

I agree Albie. Images of endangered animals need to be used to create awareness and I advocate the use of bait for this if need be. I totally agree that baited or captive subjects should be disclosed by the photographer and publishers alike!

Nice article Albie- agree with you regarding disclosing the context of the image.