I have just returned from hosting 30 days of safaris. The majority of time was spent in the predator rich Maasai Mara in Southern Kenya but I also “slipped away” with the Diskin family to Lake Nakuru and Bogoria where we caught up with thousands of Pelicans and flamingos before setting off to the stunningly beautifull and drier northern reserves of Buffalo Spring and Samburu. In stead of doing the normal “we went there and saw that” bit, I decided to share some thoughts on the actual photography that happened on these action packed days.

So if you would forgive a somewhat lengthy post here are some of my admittedly personal views on how to make the most of your east African trip. 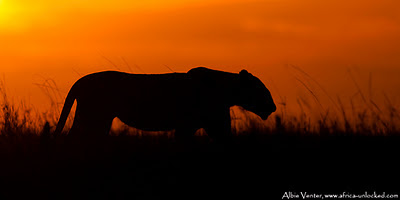 Being so well known for its predators its understandable that most people would like to concentrate on the cats. The open horizons and abundant predators of the area allows photographers to get classic images of the big cats. 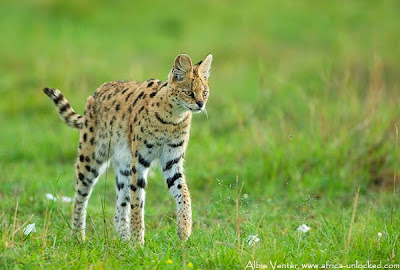 This year the wildebeest have depleted the grass which made for great Serval viewing. For Southern Africans it’s a great treat to photograph the ever elusive Servals and during our time there we managed no less than 5 individual sightings of these cats. So the above two images are almost standard Mara sightings and can be bagged quite easily.

Now for the first trap and one I fall in way too regularly. Going in too tight. As you can see from the first two images its just too easy to go in too tight. In order to try and capture the essence of the Mara one must go wide. Its difficult enough seeing these highly endangered animals in the first place let alone seeing them out in the open. So to show its unusual open surroundings I opted for the pano. 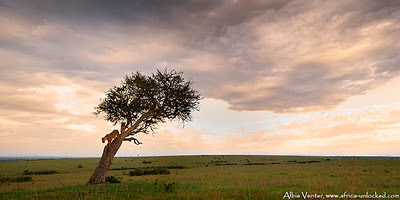 Two lionesses sleeping in a tree was quite an unusual sight and knowing that they would start getting active at around sunset we waited it out. Again the wider angle proved more rewarding as tight shots of them in a tree would fail to convey a true sense of space. And it only took two hours wait for one minute of action!! 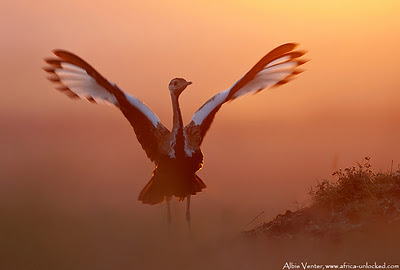 Speaking of patience! We spent another afternoon waiting for two male cheetah to wake up only to have the sun set on their innate bodies. On our way back we serendipitously stumbled on this fantastic scene. The last remaining sunlight streaming into the valley to illuminate this Black Bellied Bustard. Sheer luck that the bird decided to stretch at exactly the right time. Despondent as we were after the cheetahs, if we had packed away our gear we would have missed one of the most photogenic scenes of the trip. 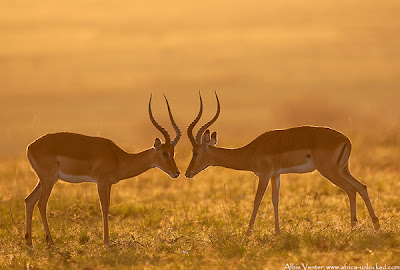 Which brings me to the next point. Everyone is always so determined to capture the big cats on camera that they drive away from other interesting scenes. I am of the opinion that a picture of Impala in good light far outweighs a lion or leopard image in harsh or poor light. So make the most of any subject when the light is good especially in this case when two animals are engaged in interesting behavior. 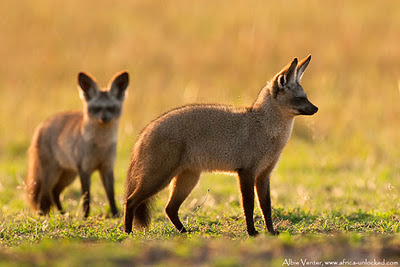 My favourite is the soft back lighting one gets during the very first and last minutes of the day. If applying the principle of utilizing good light, before long ones luck changes and you do in fact find the more interesting subjects, in this case a group of foraging Bat eared foxes, another favourite of mine. 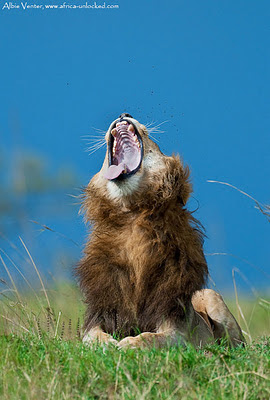 Lion portraits though are of course hugely popular and even though it has been done millions of times it still remains a hit. Here positioning is key. Due to the fact that most guests are shooting from a vehicle the vast majority of portraits are shot down into the background. In this case the lion was lying on an elevated piece of ground while a storm developed in the background. All features that would help create a great portrait. Prefocussing on the male and checking exposure while just waiting for something to happen allowed for this portrait. 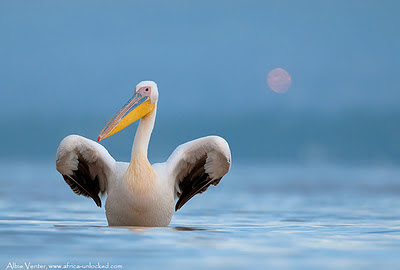 Light is of course everything in Photography and many people pack their gear away once the sun sets. With today’s technology photographers can photograph well into the dusky evenings. We also made full use of the fact that one can get out of your car in Lake Nakuru National park to get this image of a Great White Pelican at eye level. 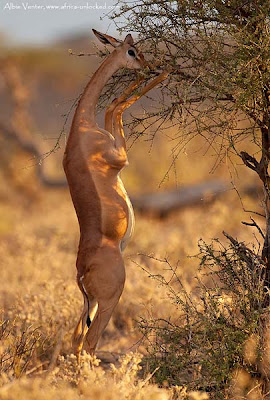 Amongst the many appealing factors of the north of Kenya is the unique array of wildlife of the area. And because we have been photographing predators in the Mara the week prior to this trip we could concentrate on the unique animals of Samburu such as this highly unusual Gerenuk. So in stead of repeating the usual pictures of animals encountered all over Africa, research an area before your safari and focus (excuse the pun!) on the specials. 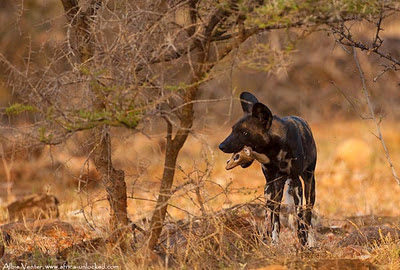 And then much to our surprise we caught up with Africa’s second most endangered carnivore. African Wilddogs hunting Gunthers Dik-dik in the late afternoon! No one could see this one coming. 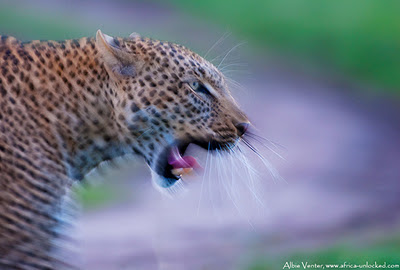 Back in the Mara for the last two weeks of exclusive safaris I caught up with Shem and Greg where we discussed at length how to up ones game in photography. One of the topics was how to capture the essence of an animal. Jokingly we decided it should be the leopard. So whether we succeeded or not here is the best that I would manage? 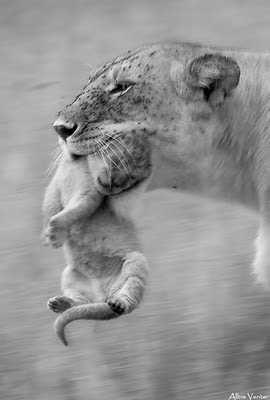 For any wildlife photographer, animal behaviour is key. And there is very little one can do but do your best to predict what an animal is going to do and be ready to capture the scene as it unfolds. This lioness was seen carrying a cub no more than a few days old to a new den site. Anticipating that she may have more stowed away we positioned the vehicles in the correct spot and waited. We didn’t have to wait long before she went to fetch the next two. All we had to do was sit, enjoy the sighting….and of course photograph like crazy. A most fitting end to a very exciting safari. See you in the sticks.
Posted by Africa Unlocked at 6:30 AM

Looks like you had a great trip. A very nice blog, makes me a little green! Lovely images.

Terrific choice of images posted here on this blog, Albie. I'm sure you had many to choose from, and these you've selected show diversity of animals and your skills. Well done.

Great images and report, Albie! So when are we finally going to shoot together???

Was looking for images that capture the essence of African Travel and here you capture the Kenyan landscape magnificently. Great stuff. You should try the Gorilla Trekking Safari.Karibu Kenya

Very nice photos. Interesting how much has to offer from the small reptiles to the world renowned scenes like the Migration. keep up the good work